Home > News>J.E. Jumonville, Jr. And Mr Jess Perry To Be Inducted Into The 2019 LQHBA Hall Of Fame 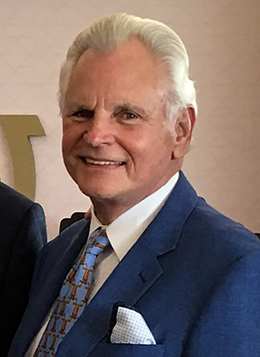 This is the fourth year that LQHBA has named its recipients, who will be honored in conjunction with the annual LQHBA Membership Meeting & Awards Banquet. The event will take place on Saturday, April 13 at the Evangeline Downs Event Center in Opelousas, Louisiana.

John Enoul Jumonville, Jr., known as J.E., is one of the most influential and longstanding members of the Louisiana racing and breeding industry. The 76-year-old owns and operates Jumonville Farms in Ventress. Louisiana. J. E. and his wife, Bunny are proud parents of three sons: J.E. "Tres" III, Dutcher and Clayton.

Since its inception in 1965, Jumonville Farms has been regarded as one of the top breeders in Louisiana. Their stallion roster includes LQHBA and AQHA Racing champion stallion Jess Louisiana Blue, a son of LQHBA Hall of Fame inductee, Mr Jess Perry; Sizzlin Cartel; Power Jam, Feature Mr Jess and Hez Fast As Cash. 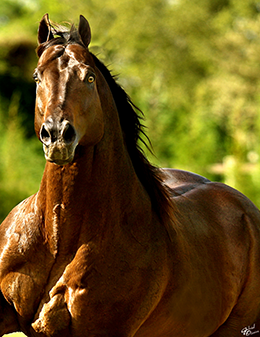 Jess Louisiana Blue has surpassed the $17 million dollar mark in sire earnings. © Gabriel Oliveira
Jess Louisiana Blue, now 21, has produced 16 crops, whose earnings have surpassed the $17 million dollar mark. His top producer was Jessa Louisiana Zoom, who won both the Lassie and Lee Berwick Futurities at Delta Downs, earning $637,531 in her 13 lifetime starts. Jumonville Farms has posted solid numbers, both on their own and in multiple racing partnerships. He and Bunny bred Jess a Saint, a son of Jess Louisiana Blue out of the Vindication mare Laughing Saint. Trained by Miguel Rodriguez, he won six of his 15 starts including the 2015 edition of the richest Quarter Horse race in Louisiana, the LQHBA Louisiana Million. His winners check of $445,000 vaulted his career earnings over the half-million dollar mark.

They also owned Feature Mr Jess, who won the 2000 Rainbow Futurity (G1) at Ruidoso Downs and returned the next year to capture the Rainbow Derby (G1). The son of Mr Jess Perry died at just 10-years-old, but a limited number of ICSI breedings are available from Jumonville Farms. 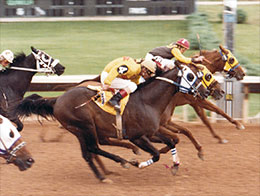 Dashingly and Justanold Love run 1-2 in the Grade 1 All American Gold Cup at Ruidoso Downs. © Ruidoso Downs
Always one of the top consignors in the annual LQHBA Yearling Sale, Jumonville Farms continues to send a quality group of well-bred prospects to the August event in Kinder, Louisiana. Jumonville Farms has also been the high-seller and high-buyer at the Ruidoso Select Yearling Sale.

Jumonville has always gone the extra mile in promoting Quarter Horse racing. With a longtime involvement in cutting horse competition, he persuaded Dave Brian, the director of shows for the National Cutting Horse Association, to come to Ruidoso Downs to enjoy the races and attend the 2008 Ruidoso Select Sale. Dave Brian professed to have no interest in owning a racehorse, but studied the catalog and even bid $70,000 on Apollitical Jess. The consignors would not take less than $150,000, and the fine yearling turned into an incredible racing champion and sire. 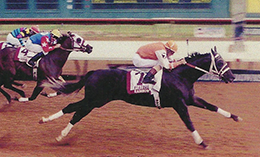 Feature Mr Jess, under jockey Jacky Martin, winning the 2000 $629,543 Rainbow Futurity(G1) at Ruidoso Downs. © Ruidoso Downs
Brian followed the career of Apollitical Jess with interest and asked J.E. if he had a mare they could breed as a partnership. Of course he did; a homebred named The Louisiana Girl. The foal was named Dutcher, after his middle son, Dutch, who runs the familys breeding farm. A partnership was structured with Jumonville Farms and Brian Ranch owning two-thirds and the remaining shares divided between 27 folks in the cutting horse world. In each of Dutchers 24 career starts, the cutting horse part-owners were invited to attend the races and more than 20 were on hand when Dutcher ran second in the 2015 Texas Classic Derby(G1) at Lone Star Park. J.E. personally escorted them to the paddock to give them a personal view of the racing experience. 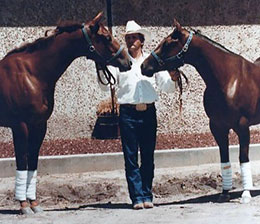 J.E. Jumonville with Dash For Cash daughters Justanold Love and Queen For Cash. ca. 1982
In addition to his excellence in breeding horses, J.E. also served as a Louisiana senator from 1976-1992. He was one of the leading forces in legislative efforts and contract negotiations with Thoroughbred and Quarter Horse racing associations in Louisiana. The end result was a significant amount of gross handle allocated to horsemen in the form of purses and breeders awards.

"He worked very hard to make the Louisiana breeders program what it is," said Dutch Jumonville. "Dad had the guts to stick up to those who said no and the persistence to keep fighting. He knew his efforts would grow the industry and help so many people."

In 2015, AQHA honored J.E.Jumonville, Jr. as a Legacy Award Winner. He joined a select group of breeders who have registered at least one foal for 50 consecutive years.

Dutch Jumonville agrees that it is virtually impossible to "sum up" the vision and accomplishments of his dad, but knows one thing for sure.

"My dad loves this industry," he said proudly. "He traded a bull for his first racehorse and will always have a genuine love for the Quarter Horse."

Racing champion and prolific sire Mr Jess Perry will join the LQHBA Hall of Fame, and his accomplishments from very humble beginnings, are quite remarkable.

He was bred in Louisiana by Jesse Perry, the father of LQHBA Hall of Fame member, Leverne Perry. Jesse had enlisted his son on the cross, and Leverne paid $1,000 for Scoopie Fein, who was bred to Streakin La Jolla in 1992, producing Mr Jess Perry. 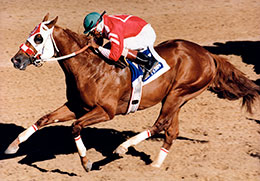 Mr Jess Perry winning the Grade 1 Texas Classic Futurity.
© Courtesy Speedhorse
But his accomplishments soared in historic fashion when he entered his second career as a stallion. Mr Jess Perry is the sire of world champion Apollitical Jess and six other champions: One Famous Eagle, Noconi, Miss Racy Jess, Fredricksburg, Fredaville and Matabari, who remains his top earner with $1,410,471. He sired 2010 All American Futurity (G1) champion, Mr Piloto, who also retired as a millionaire and is rising up the stallion ranks. His son, Mpshinning won the 2018 LQHBA Louisiana Million for Grant Farms of Pineville. They became the first Louisiana breeder to be honored as AQHA champion breeder.

Mr Jess Perry has become a sire of sires and his daughters are leading producers. The Mr Jess Perry son One Famous Eagle sired world champion One Dashing Eagle from his first crop. He won three Grade 1 stakes including the $2.4 million All American Futurity on his way to earning $2,079,065 as a juvenile.

He is also the number-one broodmare sire of 2-year-old money earners with those juveniles earning more than $4.86 million. The top 2014 money earner out of a Mr Jess Perry mare was Heza Dasha Fire, who won nine Grade 1 stakes in California, earning $2.2 million in his illustrious racing career. 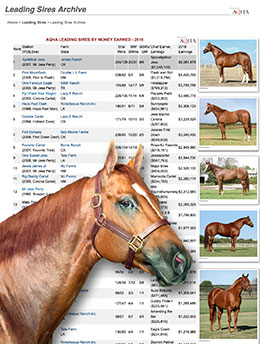 No less than five sons joined their sire Mr Jess Perry on AQHA Top 25 Leading Sires of Money Earners list in 2018.
Mr Jess Perry stands third on the list of AQHA all-time leading sires, behind First Down Dash and Corona Cartel. He has sired at least 142 stakes winners, including 86 graded stakes winners, with earnings in excess of $52.7 million dollars.

The famed stallion was syndicated in 1999 and stood at Four Sixes Ranch in Guthrie, Texas, until his death in 2017 at the age of 25.

Leverne Perry, who passed away on March 27, 2016, always acknowledged how much he had learned from his father. One of Perrys five daughters, Leigh Perry Lepinski, remains active in the industry and is pleased that Mr Jess Perry will be honored.

"This award honors both my father and grandfather," explained Lepinski. "Mr Jess Perry was the best horse my dad ever raised and meant so much to him. His heart would swell and he would get tears in his eyes every time he talked about Mr Jess Perry."

Prior to the LQHBA Hall of Fame induction, Mr Jess Perry will be inducted into the AQHA Hall of Fame in ceremonies this March as part of their annual convention. He will be the first accredited Louisiana-bred to join the elite list of equine champions, something that Lepinski is extremely proud of.

"It is wonderful for Louisiana and our association to be recognized on a national level," she added. "There is a long list of people who deserve credit for the success, both as a racehorse and then as stallion, for Mr Jess Perry. My grandfather was a small breeder, and this should give hope to everyone in our industry that dreams do come true."

This will be the fourth class inducted into the Louisiana Quarter Horse Breeders Association (LQHBA) Hall of Fame, which was launched in 2016 in celebration of the associations 50th anniversary. J. E. Jumonville, Jr. and Mr Jess Perry join this distinguished list of past honorees:

"We are looking forward to saluting Mr. J.E. Jumonville. Jr. and Mr Jess Perry as distinguished members of the LQHBA Hall of Fame," stated Tony Patterson, LQHBA executive director. "Our association takes tremendous pride in the selection of both the individuals and equine champions who have contributed to the excellence of Louisiana breeding and racing. These inductees will forever be recognized for what they have accomplished, both in our state and on a national level."