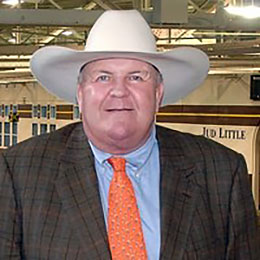 Jud Quintin Little was born in Sherman, Texas, November 26, 1946 to Quintin and Carrie Lou Scott Little. He was a member of the Church of Christ.

He attended Ardmore Public Schools during his elementary and middle school years and high school at Culver Military Academy, Culver, Indiana, graduating in June 1965. Jud then attended the University of Pennsylvania in Philadelphia where he was a member of the Sigma Alpha Epsilon Fraternity.

After earning a degree in Economics from the University of Pennsylvanias Wharton School of Finance and Commerce, Philadelphia, Pennsylvania he returned to Oklahoma and assumed control of The Quintin Little Companies.

Working in the family business for over fifty years, he served as President and Chief Executive Officer at the time of his passing. With his professional life squared away, Jud turned to his passion for horses on his ranch nestled in the foothills of the Arbuckle Mountains.

From his office at The Quintin Little Company to the Bar Nothin Ranch, Jud Little was an industry leader. He learned leadership skills from his parents Quintin and Carrie Lou and further honed those skills while attending Culver Military Academy.

Culver broadened his horizons and furthered his passion for horses. While at Culver, he was a member of the famous Black Horse Troop and rode in President Lyndon B. Johnsons inauguration parade. He also learned to play polo, a game that would take him around the world and give him an appreciation for the agility of the equine athlete.

Jud was well known and loved in the Rodeo World as he graciously gave not only financially but most importantly from his wisdom, advice, time and experience to anyone that asked. He supported and invested in people and was considered one of the elite, top horsemen in timed events; earning the Decades Leading Breeder and Owner numerous times over the years.

He was inducted into the Horsemanship Hall of Fame April 8, 2004 for his achievement in the equestrian world and honored as Culver Graduate of the Year in 2015. Jud believed very strongly that a good education . is something that can never be taken away.. Because of this belief, in 2008, he established the Jud Little Scholarship for rural Oklahoma youth to attend Culver Academies on a four-year scholarship. In 2009 the Jud Little Riding Hall was dedicated in his honor.

He served as a former Commissioner of the Oklahoma Department of Wildlife Conservation (1977-1991), former President and member of the Y.M.C.A. and member of the Board of Directors, past president of the Ardmore Rotary club, former Director of the Ardmore Chamber of Commerce, Chairman of Ducks Unlimited and many, many other civic and professional organizations.

In lieu of flowers, memorial contributions may be made to the Jud Little Scholarship Endowment at Culver Academies, 1300 Academy Road #153, Culver, IN 46511, culver.org/makeagift or Ardmore YMCA, 920 NW 15th, Ardmore, OK 73401.