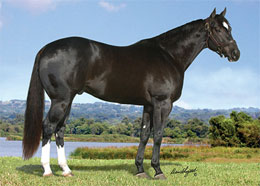 Bred and raced by Jumonville Farms, the son of leading AQHA sire Mr Jess Perry is the only Louisiana-bred to win a Grade 1 race at Ruidoso Downs (he won two) with 13 wins from 16 career starts and earned $532,327. He won both the Grade 1 Rainbow Futurity and Grade 1 Rainbow Derby at Ruidoso Down as well as finished second in the Dash For Cash Futurity(G1) and third in the Remington Park Futurity(G1). He was also third in the All American Derby(G1) and a finalist in the Texas Classic Futurity(G1) and Texas Classic Derby.

Four-time champion Heartswideopen winning the 2007 All American Futurity at Ruidoso Downs.
© Q-Racing / Andrea Caudill
Jumonville sold an interest in Feature Mr Jess while he was racing and the stallion, who died at the young age of 11 in 2009, stood his entire short career in Texas.

"We are excited to bring Feature back home," J.E. Jumonville said earlier this week. "We will be offering a limited number of breeding's to Feature Mr Jess through the ICSI process." 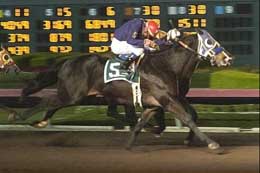 From 10 crops to reach racing age, Feature Mr Jess sired 436 winners (67%), 128 stakes horses (20%), 7 champions with earnings of $24.9 million and Average Earnings Per Starter of more than $38,000. His offspring have won some of the biggest Quarter Horse races including the All American Futurity(G1) and Champion of Champions(G1) and he is the only Quarter Horse sire with two earners of more than $1.8 million. 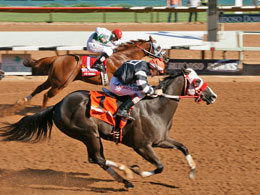 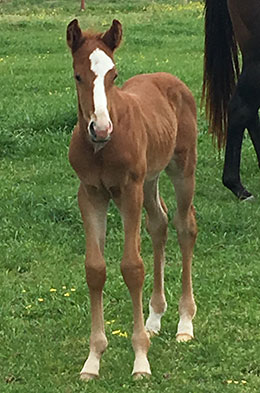 Feature Mr Jess is the #1 siring son of leading sire Mr Jess Perry and the only two sires with an AQHA Racing champion in almost every category.

"We have an outstanding Feature Mr Jess' colt foaled this year (2017) from the ICSI process out of a Jess Louisiana Blue daughter of champion Corona Cash," Jumonville said.

"If you compare what Feature Mr Jess sired in eight crops to race (his final two crops consisted of only 15 foals), you find his numbers are comparable to Corona Cartel, Mr Jess Perry and One Famous Eagle," Jumonville says.

"We are looking to work with a limited number of breeders who want to get the final foals from Feature Mr Jess," he concluded.