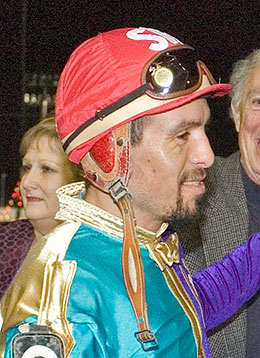 It has been on my mind to retire, and I had told myself that I could retire at anytime past my 40th birthday, said Ramirez. I have spoken with the stewards here at Evangeline Downs, and I have decided to pursue a career as a trainer. I was thinking about closing out my career on Louisiana Champions Day aboard Open Me A Corona. That race will close out his career, but I have decided to wait for later that night and ride at Evangeline."

Ramirez has ridden Open Me A Corona to five straight stakes wins this season. The son of Coronas Leaving You has earned nearly $700,000 and will make his final start as the morning-line favorite in the $100,000 Louisiana Champions Day Classic Stakes(RG2) at Fair Grounds Race Course in New Orleans. Following that race Ramirez will head to Evangeline Downs in Opelousas.

"The eighth race at Evangeline Downs on Saturday will be my last mount as a jockey," he said. 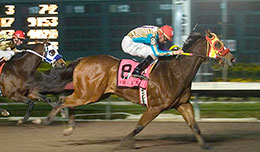 Blue Girl Too, under jockey Saul Ramirez, Jr. sets a new track record while winning the 2007 Champion of Champions at Los Alamitos. © Scott Martinez
The jockey has been named to ride Slinky Kas, a 4-year-old gelding, in the $10,000 claiming event for Louisiana-breds.

Ramirez, 43, has been making a name for himself in the competitive world of Quarter Horse race riding since debuting at Bandera Downs in 1983. Since then, the jockey has won more than 25 major stakes races in the sport, including the Los Alamitos Two Million Futurity(G1)-twice and the Champion of Champions(G1).

"Back in 1999 I came to ride in California for a while and that's where I first met Paul Jones," he said. "He asked me if I'd be willing to help him out at Ruidoso Downs. I jumped at the chance."

Through today (Dec. 10), Ramirez has ridden 1426 winners from 9940 starts and earned more than $23.6 million in purse money. He has 111 stakes wins and has placed or shown in another 218 additional stakes races.

"Hard work and good horses - that's about it," he said, when asked to what he attributes his success.