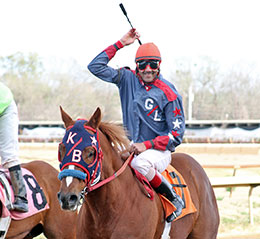 -Veteran riders Donald Watson and Ricky Ramirez both celebrated riding milestones as we move into the middle of March.

Watson, who is aboard the Kevin Broussard trained Tm All In in the Mardi Gras Derby(RG2) on Saturday at Louisiana Downs, eclipsed the 1000 win plateau in his racing career earlier in the 2015 Quarter Horse racing meet in Bossier City, Louisiana.

The 49-year-old Ville Platte, Louisiana native is a mainstay on the Louisiana Quarter Horse racing circuit, and brought home the win aboard Touch of La Jolla in the 1996 LQHBA Futurity(RG1), Sante Mon Amie in the 2010 Mardi Gras Futurity(RG2 ), and Eyesa Flash in the 2010 Laddie Futurity( RG2 ), etc. 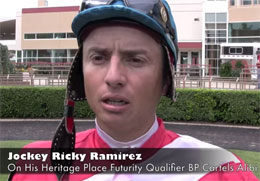 In recognition of Watsons milestone, Louisiana Downs will be making a presentation before the second race on Saturday in Bossier City, Louisiana.