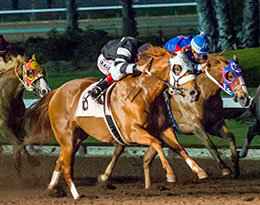 The Los Alamitos Oaks is the nation's richest race for 3-year-old fillies and Dreams Divine appears to be the nation's top filly right now. Bred by J. Garvan Kelly, Nancy Yearsley and J.L. Yother, the Apollitical Jess filly out of Answer The Dream, by Tres Seis, improved her 2020 record to perfect three-for-three after covering the 400 yards in :19.768.

Ridden by Oscar Peinado for trainer Mike Robbins, Dreams Divine broke nicely but trailed the quick breaking Suite Expectations at the start. She began to take control of the Oaks at the halfway point and then pulled away late while drifting in late. Sent off as the 3-5 favorite in this race, Dreams Divine finished ahead of Dunn Ranch's talented filly Southern Wagon with Paul Jones, Howard Nichols and Thompson Racing Inc. finishing third. 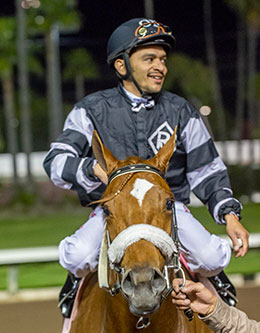 Jockey Oscar Peinado aboard Dreams Devine, winner of the 1st running of
the Los Alamitos Oaks on Saturday at Los Alamitos Race Course. © Scott Martinez
Dreams Divine began the year by winning the AB What A Runner Handicap on January 25 before posting the fastest qualifying time to the Los Alamitos Oaks after a tremendous trial victory on March 7. The Oklahoma-bred filly was outstanding as a 2-year-old last year. She finished second by a nose to the outstanding Flokie in the Grade 1 Ed Burke Million Futurity and was third in the Grade 2 Robert Adair Kindergarten Futurity. She's now won six of eight starts and her $169,470 earnings for winning the Oaks took her career bankroll to $408,209.

"She was pretty fresh. She was acting up a little bit in the gates," Robbins said. "She doesn't usually do that but here in this last week, she's just been in the top of her game. There were some nice fillies in here. This was a good group. If she ran like she did, I knew she would be there or very close."

Dreams Divine will continue her season with her sights set on some of the biggest races for 3-year-olds in the country.

"She's (eligible) for the Oaks in Ruidoso and the Los Alamitos Super Derby," Robbins said. "We'll see how she pulls up and will make decisions from there. I love the (Los Alamitos Oaks) for these fillies. I think it's just great."

Ridden by Jesus Rios Ayala for trainer Monty Arrossa, Southern Wagon earned $68,585 after a very impressive second in the Los Alamitos Oaks. The homebred Pyc Paint Your Wagon filly was sixth at the start before moving up to fifth in the first part of the race and then flying late to edge Suite Expectations by a nose for second.

Southern Wagon earned $69,000 for her effort. Matt Dunn bred the brown filly in Oklahoma from the Shazoom mare Marys Southernpolicy. A finalist in the Golden State Million Futurity(G1) and the Rainbow QH Futurity(G1) she has earned nearly $150,000.

Juan Pablo Leon led the Jones-trained Suite Expectation to earnings of $48,420 for running third. Owned by the partnership of Paul Jones, Howard Nichols and Thompson Racing, the Blain Bateman Utah-bred the daughter of Apollitical Jess is from the Corona Cartel mare Just A Fairytale. She more than doubled her career earnings with this effort. She's now banked $80,800.