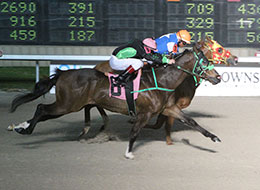 Droff showed early speed under jockey Luis Vivanco then held off Sr Shambles by a neck to record a :17.425 clocking, a 97 speed index and the top qualifying time from the 42 3-year-olds who starting in the Old South Derby trials.

Out of the Corona Cartel mare Cindys First Cd, Droff was touted as one of the top 2-year-olds to watch last summer after he posted the fastest training race at the mountain racetrack prior last year's opening weekend. He has compiled a (8) 2-0-2 record and eared $9,622.

The Carter II, under jockey John Hamilton, was a half-length winner in the final trial to post the third fastest time of :17.441 seconds, a 96 speed index.

Making his first start since a second-place effort in an Optional Claiming race at Louisiana Downs in February, the son of champion Carters Cartel races for owner/breeder Aaron Harvey. Michael Taylor saddled the bay gelding from the Strawfly Special mare Wanna Fly. The Carter II has earned $15,640 with a (8) 3-1-3 record.

The 10 fastest qualifiers will return to Delta Downs on Friday, May 11th to vie for the winner's share of a $69,552 purse.

FDD Dynasty and leading sire Apollitical Jess were the only sires with multiple qualifiers, getting two each into the final. Trainer Josue Ponce saddled two qualifiers, while jockey Rolando Pina qualified to horses.

For more information about the upcoming season visit the tracks website at www.deltadownsracing.com or on the Facebook page, Delta Downs Racing. The tracks Twitter handle is @deltaracing.