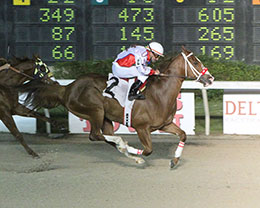 The 10 fastest qualifiers, from the five trial races on Delta's opening-night Quarter Horse card, will return to Delta Downs Friday, May 13th to vie for the winner's share of $71,075 purse going 350 yards.

Bred in Texas by Andrew Gardiner, from the Leaving Memories mare Adorable Deer, Politically Corrupt has won a combined record of (9) 3-2-2. This is the first stakes race the gelding has qualified for.

Sr >Inseperable defeated Cartel Gigi by a head in the first trial to get the 2nd fastest qualifying spot of :17.836. It was the first career win in five starts for the daughter of Inseperable out of Sr Shesa Dean, by Dean Miracle.

Trainer Adrian Huitron saddled the bay filly for owner Jorge Aguilera. Bred in Oklahoma by Andrew Smith, Sr Inseperable finished second in her first start, a trial for the Oklahoma Futurity at Remington Park at 2. She was off the board in her final three starts last season including two trials at Ruidoso Downs. Manuel Gutierrez was also aboard the second fastest qualifier.

Jockey John Hamilton rode Paint Me A Storm, a stakes-placed son of Red Storm Cat, to a three-quarter length victory in the second trial to get the 4th qualifying spot of :17.852. The brown gelding put in a solid rally for trainer Kenneth Weeks and owner Winners Racing. Randy Hill and Andy Golden bred the earner of more than $32,000 from the Pyc Paint Your Wagon mare Paint Me Golden.