Nine Indicted In Illegal Texas Horse Racing Ring
Officials say unsanctioned bush tracks like this one contributes to the spread of EIA and piroplasmosis in U.S. horse populations. 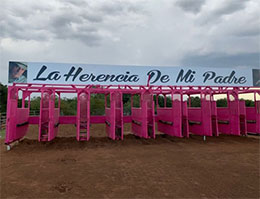 Nine Indicted In Illegal Texas Horse Racing Ring
FORT WORTH, TXJANUARY 10, 2020A grand jury has indicted nine people for operating an illegal horse racing meet near Fort Worth, Texas. Animal health regulators report that illegal racing at so-called "brush tracks" is associated with the spread of serious horse diseases, such as equine infectious anemia and piroplasmosis, and puts horse welfare at risk.

Parker County Assistant District Attorney Jeff Swain said that, if convicted, each of those indicted could face penalties of two to 20 years in prison and fines up to $10,000 for every count of conducting a horse race without a license.