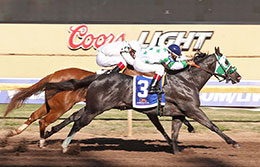 Last year, this gelded son of champion sire The Louisiana Cartel, out of the Feature Mr Jess mare Streakin in Secret, ran second to the 2019 Remington Park Horse of the Meeting, Pollitical Attraction, in the Remington Park Championship June 1. Mi Amor Secreto was beaten by one length in that event.

On Sunday, he upset the heavily favored Valiant Tiberias in the Bank of America Challenge. Valiant Tiberias came into this race having won six of his last nine starts, including four stakes races, two at Ruidoso Downs and one each at the Downs at Albuquerque and Sunland Park, all on the New Mexico circuit.

Oklahoma hasnt proven to be Valiant Tiberias cup of tea as he finished third on Sunday but was disqualified for interference and placed ninth. Prior to this race he had raced only once at Remington Park and finished sixth in a maiden race on April 27, 2018.

Jockey Jose Alvarez broke second on the winner out of the gate and then took over mid-stretch all the way to the wire in the 440-yard challenge. He won for trainer Marcos Carrizales and owner/breeder Kelly Perez of Seguin, Texas. It was Mi Amor Secretos (My Secret Loves) first victory at Remington Park in five tries. He is a 5-year-old gelding bred in Texas by the owner.

We knew that horse in the 10-hole (Valiant Tiberias) was good, but we were confident we could win, said Alvarez. Our horse had been training good and is real sound and can run 440. That favorite is really good, but we were not afraid.

Mi Amor Secreto improved his career record to 19 starts, five wins, seven seconds and one third for earnings of $478,765. He took home $32,903 for first place in the Bank of Oklahoma Challenge. Mi Amor Secreto won by a neck over 38-1 longshot Fenian Faith and stopped the timer in :21.392 for his effort on a fast track. That was good enough for a 97 speed index.

He beat a good group of horses today, Carrizales said after the race. I felt like he was going to run that kind of race.

Viva Le Don was placed third after the disqualification.

Mi Amor Secreto went off at 4-1 odds and paid $10 to win, $5.40 to place and $3.60 to show. Valiant Tiberias was sent off the heavy wagering favorite at 3-5 odds. At the wire before the DQ, Fenian Faith was a neck ahead of the favorite, who was another three-quarters of a length in front of Viva Le Don.

Dee Kenner saddled Fenin Faith with Raul Valenzuela in the saddle. The $14,306 second-place payday boosted the filly's earnings to nearly $70,000. She entered the race off a fourth-place finish in the Charger Bar Handicap(G1) at Los Alamitos Race Course on January 5.

Remington Park racing is scheduled to continue Thursday through Sunday, April 2-5. The Thursday program of nine races, includes two stakes races  the Grade 2, $42,500 Pauls Valley Stakes as the seventh race and the restricted Grade 2, $59,000 Mr Jet Moore Stakes as the eighth. There will be a $25,635.01 carryover in the Sooner 6ix on Thursday.