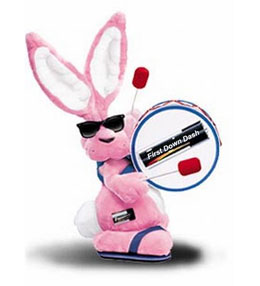 First Down Dash Keeps On Ticking
BONSALL, CAJULY 25, 2010When most stallions are tapering off as they get older, the industry's all-time leading sire First Down Dash reminds us of the 'Energizer Bunny'. He just keeps on ticking!

Sunday the 26-year-old stallion sired his 221st stakes winner when Hes Too Icy For Me won the grade 1 $625,000 Rainbow Futurity at Ruidoso Downs, thwarting the nation's #1 two-year-old American Runaway's bid to win a "Triple Crown".

Hes Not Too Icy For Me became the third grade 1 winner from the current crop of two-year-olds sired by First Down Dash.

Givinitaroyaleffort kicked off the grade 1 run on May 29th when he won the $1.1 million Heritage Place Futurity at Remington Park. First Down Illusion picked off the second grade 1 win for his sire on June 19th by winning the Ed Burke Million at Los Alamitos Race Course.

First Down Dash's current crop of two-year-olds have earned in excess of $1.61 million through the weekend. The former world champion, who holds every AQHA Racing sire record, has amassed earnings of over $72.1 million. His total get earnings for 2010 is more than $2.1 million.

First Down Dash extended his lead as the current #1 Leading Sire of Two-Year-Olds for 2010 and the Rainbow Futurity win should move him to the top of Leading Sires of Money Earners List for 2010.

The sorrel stallion has sired a record six All American Futurity(G1) winners.

Property of a syndicate, he stands at Vessels Stallion Farm near Bonsall, California. For additional information contact Scoop Vessels or Kevin Dickson at 760-414-3300.