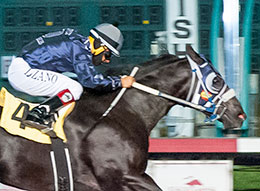 The two are among the 10 juveniles that will square off in the running of the $99,350 Wild West final on Sunday at Los Alamitos.

Relentless Six was tremendous in his Wild West trial, moving from fourth at the start to an impressive 1-¼ length winner for trainer Danny Montes and jockey Ruben Lozano. Three races ago, the North Dakota-bred gelding was second in the Firecracker Futurity at Grants Pass while hitting the board in each of his last four starts. The Eddie Cramer and Tom or Bill Maher-bred runner will start from post number four on Sunday.

Owned and bred by XG Bar Racing LLC, Proud Movin Renegade finished a strong second in his Wild West trial and before that he won the Bitterroot by a length. That futurity win was his fourth victory in a row - all of them with Jesus Valenzuela aboard. Valenzuela will be back aboard the Maknmoves gelding in the Wild West final, this time from post number six. Proud Movin Renegade should also benefit from making his second local start at the Orange County track, all of it while also being the richest horse in this field with over $45,000 in earnings.

The field will be completed by Delila Rose, the fourth-place finisher in the John Deere Los Alamitos Juvenile Challenge, RMR Take Notes, One Sweet Morgan and Quirksome.