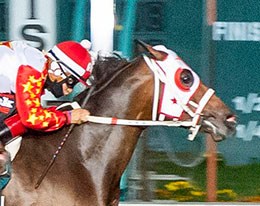 Familiar Foes Face Off In John Ward Handicap On Saturday
LOS ALAMITOS, CAOCTOBER 16, 2020Its a rematch of the Blane Schvaneveldt Handicap when the top three finishers in that race get together once again in the $16,000 John Ward Handicap at 400 yards on Saturday night at Los Alamitos.

Gary and Jeralyn Messengers Zoom On Jess was the half-length winner of the Schvaneveldt when taking on older foes as the 6-5 favorite. He looks ready for a repeat when he starts in the John Ward from the outside post six.

To be ridden by Armando Cervantes for trainer Monty Arrossa, Zoom On Jess has been red-hot with wire-to-wire victories in each of his last three starts. Prior to his Schvaneveldt win, Zoom On Jess won the Bitterroot Derby by ¾ lengths and for his career he has finished in the money in 13 of 17 career outings. The Idaho-bred gelding was also a stakes winner at Los Alamitos last year.

Hugo Barron-Sierras Favorite Rock had a strong campaign at Arapahoe Park, winning the $75,000 Rocky Mountain Derby on July 1 and then finishing second in the $53,000 Mile High Derby on August 26.

A graduate of the Los Alamitos Equine Sale, the Favorite Cartel gelding was fourth at the start of the Schvaneveldt before surging at the midway point to run second. Local rider Alejandro Luna traveled to Arapahoe Park to ride Favorite Rock in all four of his starts at the Aurora, Colorado racetrack. He also piloted him expertly in the Schvaneveldt and retains the mount for the John Ward.

Chris Suttons CM Boom Shakalaka,the winner of the Bank of America Emerald Downs Challenge on August 20, stayed in town instead of traveling to The Downs at Albuquerque for the AQHA Challenge Championship series taking place on Saturday night. He was third in the Schvaneveldt and will look to improve on that result when he starts from post five for Arrossa. Jose Nicasio will ride.

Staubach, Freight Boss and Captain Mazurk will complete the field.