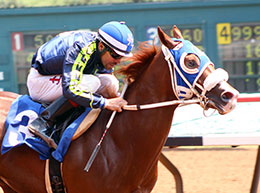 A sorrel son of the First Down Dash stallion Zulu Dragon trained by Juan M. Gonzalez for owner Joe Rios, Eagles And Dragons has earned $67,600 from four starts, and he was the fourth-fastest overall qualifier to the September 7, $3-million All American Futurity at Ruidoso Downs, Quarter Horse racings richest and most prestigious race.

The gelding drew post 3 and will be ridden by Jaime Parga Leos in the last of eight heats.

The sorrel Jesse James Jr gelding will be making his first start since July 26, when he ran third, three-quarters of a length behind winner Hollyn Bootie, in the 400-yard, $353,000 Zia Futurity (RG1) at Ruidoso Downs.

Vine Master has won three of four starts and has banked $70,866. The gelding drew post 6 and will be ridden by Sergio Becerra Jr. in the second trial.

Midnight Train Mo drew the rail post and will be ridden by Alan Hernandez in the third heat. Trained by Juan Martin Triana for owner Mason A. King, the Rock Solid Jess colt has earned $40,955 from six outs and New Mexico and Texas, and his summer resume included a third-place run, a neck behind winner Leading Cartel, in the 350-yard, $334,000 Mountain Top Futurity (RG2) at Ruidoso Downs in June.