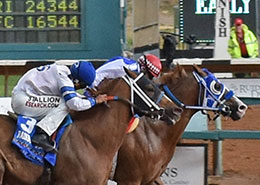 A sorrel son of Five Bar Cartel trained by John Stinebaugh, Five Bar Stoli has earned $196,189 from six outs this year, and the geldings season resume includes a second-place finish, a neck behind winner Eagle Coast, in the 440-yard, $1,008,129 Rainbow Derby (G1) at Ruidoso Downs on July 20. Five Bar Stoli drew post 7 and will be ridden by Gilbert Ortiz in the fourth heat.

Sumokeonthewater, a gray son of champion FDD Dynasty trained by Josue Ponce for owner Ruse Ranch LLC, will be shortening in distance off of his third-place finish, 1 3/4 lengths behind winner Eysa Jess Jumpn, in the 440-yard, $204,600 Dash For Cash Derby (G3) at Lone Star Park on October 5. The gelding drew post 8 and will be ridden by Jesse Levario in the first trial.

Ruse Ranch and Josue Ponce will also be represented by Psychopath, a stakes winning son of the Favorite Trick (TB) stallion Favorite Cartel. Psychopath has banked $75,951 from six starts this season, and his four wins include a neck victory in the 400-yard, $127,600 Retama Park Derby on July 27.

Psychopath drew post 6 and will be ridden by Victor Urieta Jr. in the fourth trial.

The 10 fastest qualifiers will meet in the $50,000-added Evangeline Downs Derby final on December 14.