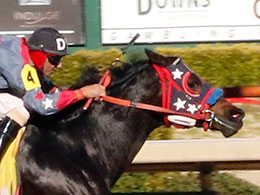 Joel Galindo's Scoopies Leaving You ran second in last year's Mr Jess Perry and comes into Saturday's feature off a solid win in the $15,000 Harrah's Dash on January 6. The 7-year-old son of Coronas Leaving You has won 17 of his 43 career efforts, bankrolling $327,433 to date. The multiple-graded stakes winner drew post position eight and will be ridden by his regular pilot, Donald Watson. Kevin Broussard trains the multiple graded stakes winner and has tremendous pride in his accomplished veteran.

Trainer Kenny Roberts has two capable entrants in the feature: Bobby D. Cox's Icanonlyemagine, who drew the rail and Im All Out, who will break from post position nine for Girl Goes Racing, LLC.

"I'm looking for both horses to run well on Saturday," said Roberts. "Icanonlyemagine has been training well and will be competitive. I just got Im All Out, but he ran two good recent races."

The stakes is named in honor of Mr Jess Perry, the acclaimed racehorse and stallion who passed away last November at the age of 25. Honored as AQHA Racing Champion 2-Year-Old and Champion 2-Year-Old Colt in 1994, he won 12 of his 21 career starts before setting new standards as a stallion. Mr Jess Perry sired 138 stakes winners and 156 stakes placed horses, including nine running champions. He remains one of only three Quarter Horse stallions to sire the racing earners of more than $52 million.

Here is the field for the Mr Jess Perry Stakes, in post position order including jockey assignments and morning-line odds:

The 2018 Quarter Horse racing season at Harrah's Louisiana Downs got underway on Saturday, January 6. The 46-day meet includes 12 stakes highlighted by the first official championship for 2-year-olds, the $310,466 Mardi Gras Futurity on March 17. Live racing will take place Saturday, Sunday, Monday and Tuesday with a 1:00 p.m. (Central) post time and will continue through March 21. Saturday, February 24th post time has been moved up to 11:30 a.m.

About Harrah's Louisiana Downs
Located near Shreveport in Bossier City, Louisiana, Louisiana Downs opened in 1974 and was purchased by Caesars Entertainment in December, 2002. With annual Thoroughbred and Quarter Horse racing seasons, the track is committed to presenting the highest quality racing programs paired with its 150,000-square foot entertainment complex offering casino gambling, dining and plasma screen televisions for sports and simulcast racing.