Double Header Of Stakes Action On Friday Night At Los Alamitos
Jess A Cowboy will head a strong field in the $16,000 He Flys Handicap at 350 yards on Friday at Los Alamitos. 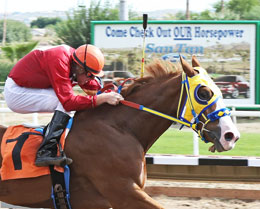 Double Header Of Stakes Action On Friday Night At Los Alamitos
LOS ALAMITOS, CAAUGUST 26, 2017After taking on Grade 1 level competition in his most recent outing, Larry Starks Jess A Cowboy will head a super field of older horses in the running of the $16,000 He Flys Handicap at 350 yards on Friday at Los Alamitos.

The 8-race night card will also feature a second Quarter Horse stakes, the $15,000 The Plan Handicap for 3-year-olds, which is scheduled as the eighth race on the card. The He Flys is the fourth race on Friday night.

The evening card is the second program of the day at Los Alamitos, as the Orange County program is also hosting daytime Southern California Thoroughbred racing thru September24.

Fridays stakes races feature fields of horses that have made at least two starts in either Arizona, Nevada, the Intermountain region or Northwest region. The aforementioned Jess A Cowboy made his way to California after making two starts in Arizona in April.

He competed in the 440-yard Bank of America California Championship Challenge in his Los Alamitos debut, where the Dejon gelding ran fifth against the likes of Flash N Bling, the runner-up in last Sundays Grade 1 Go Man Go Handicap, and Grade 1 Vessels Maturity runner-up The Charm Of Corona. Cruz Mendez will ride Jess A Cowboy for trainer Matt Fales.

Gary Laramie and Janet Oakesons Genuine Version won the Adequan California Derby Challenge in his last start, winning the 400-yard dash by a nose. He also won the Sun Downs Derby Challenge in Kennewick, Washington. Monty Arrossa will saddle the Winners Version gelding, wholl be ridden by Cesar De Alba. Four others will compete in the He Flys.

A full field of 10 will race in The Plan Handicap at 350 yards and this race will be headed by Martha Wells Governors Cup Futurity finalist Yanque.

Also trained by Matt Fales, The Favorite Cartel gelding won his trial to the $390,000 Governors Cup on July 17. He raced at Turf Paradise earlier this year. His rivals in The Plan will include Pot O Gold Futurity winner Recking Ball and South Valley Futurity winner Krash Your Party. Recking Ball won the Pot O Gold at Sun Downs, while Krash Your Party took the South Valley at Laurel Brown in Utah.