What is the Bank of America?
Additional Challenges
Current Nominees and Sustaining Payments 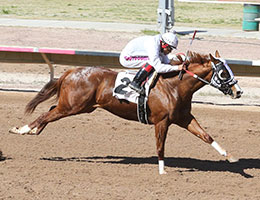 The 10 fastest qualifiers, from 11 head who competed in two trials at Rillito Park, will return to the Arizona racetrack on Sunday, March 22nd to vie for the winner's share of $40,000-added purse as well as garner the first spot in the 2020 Grade 1 $250,000-est. Bank of America Championship Challenge (G1) to be contested October 24th at Albuquerque Downs.

Ridden by jockey Erick Valenzuela, Captain Mazurk raced over the 440 yards course in :21.455 seconds, earning a 114 speed index on a fast racing surface with no wind. It was the third win in 13 career starts for the sorrel filly.

Coming off a win in the Turf Paradise QH Championship Stakes in his last start December 28th, Pirate Coves Hero won the second trial by 1-½ lengths to get the second fastest time of :21786 seconds, equaling a 106 speed index.