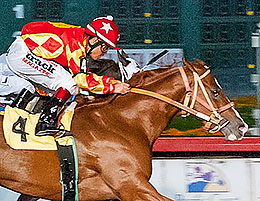 The racing program will feature a trio of allowance events and its in these races that the talented stakes placed runners will be in action. Lupe Ayons Galloping Goddess, who won a Southern California Derby trial and raced in the Grade 2 final, will headline the seventh and final race on the card.

Shell face Vince Gencos Madam Of Fire MV, a talented mare who ran second in both the Rebagain Handicap on December 14 and against the boys in the Sprint Stakes on July 27.

Madam Of Fire MV has faced the top older mares on the grounds in several occasions, running fifth in the Grade 1 Charger Bar Handicap on January 5 and seventh in the Grade 1 Mildred Vessels Memorial Handicap last September. Cruz Mendez will ride the Jose Flores-trained 5-year-old mare by Walk Thru Fire.

Martha Wells Fashin Icon, who ran second to Dreams Divine in the AB What A Runner Handicap on January 25, will headline the $11,025 allowance in the sixth race. This field will also feature recent daylight winner Five Bar Jackpot and allowance winner Check My Cartel. The other allowance event will take place in race five and will be headed by 2019 Governors Cup Futurity finalist Come Forth.