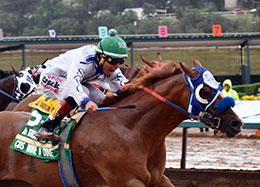 Other contenders include Mystic Blues, a 4-year-old Walk Thru Fire mare trained by Sergio Ibarra for owners LOS LLC and Abelardo F. Gallegos. Mystic Blues is coming off of a 3-year-old campaign during which she earned $138,797 from seven outs and ran fourth, 1 1/4 lengths behind winner Eagle Coast, in the 440-yard, $1,008,129 Rainbow Derby (G1) at Ruidoso Downs.

Mystic Blues drew post 10 and will be ridden by Sergio Becerra Jr.

The complete lineup, in post position order including jockey and weight assignments:

All Sunland Park races can be seen at Q-RacingVideo.com.