Two Divisions Of The $15,000 Harrah's Dash Drawn For Saturday's Opening Day Card
Two divisions of Harrah's Dash will be contested on Saturday at Louisiana Downs . 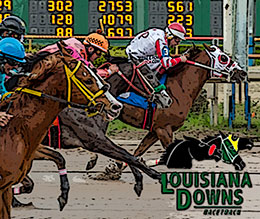 A field of nine Louisiana-bred sprinters will compete in the first heat, which runs as the fourth race on the program.

J &J Racing LLC's Fantasticazoom Jr is the 5-2 morning line choice in the first 250-yard feature. The 5-year-old son of Fantastic Corona Jr has won his last two races for trainer Jose Carrizales and will break from the far outside post under rider Ricardo Hernandez, Jr.

Carrizales, 23, got his trainer license last year and has 30 stalls at Louisiana Downs. He spoke about Fantasticazoom Jr competing at 250 yards on Saturday.

"He's very powerful and has won at longer distances," he said. "But I feel if he leaves the gates well, he has a very good chance."

The field also includes Capitan de La Playa, who has an excellent record at 250-yards for conditioner Josue Ponce. The 5-year-old gelding by Captain Courage exits a starter allowance win at Lone Star Park on November 8, which was his third consecutive victory. Regular pilot Victor Urieta, Jr. has the return call for owners Roberto and Augustin Hernandez.

Here is the field for the first flight of the Harrah's Dash, in post-position order including jockey assignments and morning-line odds:

Trainer Jose Carrizales will saddle Ss Classyjess, the 2-1 morning line choice in the second division of the Harrah's Dash. Owned by Edgar Rosales, the 5-year-old daughter of Rock Solid Jess ran second in the $20,000 Sam's Town Stakes on December 14 at Evangeline Downs. The Texas-bred mare has won five of her 18 career efforts and her regular rider, Juan Garcia, will guide her from the rail.

"This mare is small, but very quick," explained Carrizales. "She has always been very good from the gates, which is why she's done well at 250 yards."

Allowance winner Jess Glance, trained by Ponce, makes her Louisiana Downs debut as the 9-2 second choice. The 5-year-old mare by Mr Jess Perry is owned by La Feliz Montana Ranch LLC and will be ridden by Victor Urieta, Jr.

Here is the field for the Harrah's Dash (Race 6), in post-position order including jockey assignments and morning-line odds:

All Louisiana Downs races can be seen at Q-RacingVideo.com.

Located near Shreveport in Bossier City, Louisiana, Louisiana Downs opened in 1974 and was purchased by Caesars Entertainment in December, 2002. With annual Thoroughbred and Quarter Horse racing seasons, the track is committed to presenting the highest quality racing programs paired with its 150,000 square foot entertainment complex offering casino gambling, dining and plasma screen televisions for sports and simulcast racing.