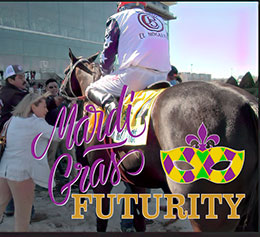 Sir Runaway Dash is owned by Down South Racing LLC and trained by Ned Goutierrez III. She has been installed as the 5-2 morning line favorite with the meet's leading jockey, Everardo Rodriguez, guiding her from post position two.

Sir Runaway Dash is also the sire of fourth-fastest qualifier, Jrs Sir Pop a Top, who is owned by Patrick Richardson and trained by Joe Davis. Davis will saddle two finalists with jockey Rolando Pina opting to ride Jrs Sir Pop A Top and Jose Rodriguez getting the call aboard Mr Achievement B. One of three finalists sired by Freighttrain B, Mr Achievement B is owned by Quency Grant and set the ninth-fastest qualifying time.

Apollitical Blood, was a standout in her schooling race early last month and will be ridden by Eddie Sanchez.

Jet Black Patriot. Vals Fortune won the 2003 edition of the Mardi Gras Futurity and the Heath Taylor trainee went on to win 20 of his 23 starts, becoming the first Louisiana-bred millionaire.

Jet Black Patriot, bred and owned by Richard and Janelle Simon, stamped his name in the record books, winning the Mardi Gras, Lee Berwick and LQHBA Breeders Futurity, with a runner-up finish in the All American Futurity (G1) at Ruidoso Downs as well.