Honoroso Upsets Red Cell Challenge Championship
LOS ALAMITOS, CANOVEMBER 9, 2013Despite having a solid record of nine wins in 26 prior starts, with most of those coming in Utah, Idaho and Wyoming, Honoroso came into the $100,000 Red Cell Distance Challenge Championship (G1) on Saturday at Los Alamitos with a bankroll of just $41,329.

After an 870-yard sprint in a hand-timed :45.470, the Utah-bred earned $48,000 to more than double his career bankroll. Ridden by Ramon Guce for trainer Ryan Hanson and owners Richard Gardner and RTM Stables, Honoroso dueled for the lead throughout and held on to prevail by a neck at odds of 6-1. 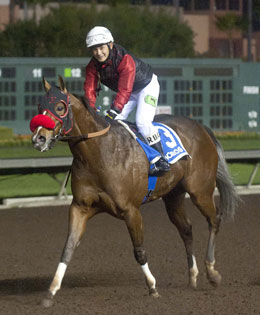 Jockey Ramon Guce returns aboard Honoroso after winning the Red Cell Distance Championship. Scott Martinez Photo
Bred by Sassy Farms LLC, the 4-year-old gelding by Fly Jess Fly shipped into Los Alamitos after consecutive wins at the Eastern Idaho Fair and Wyoming Downs. Honoroso qualified to the race with a decisive victory in the Red Cell Les Bois Distance Challenge in Idaho. His record now stands at 27-10-6-5 with earnings of $89,329.

The horse has been in Idaho the past two years, said Hanson. We always thought he was going to be a good 870 horse. We are very fortunate he ran so well on the biggest stage in racing. I honestly thought he could do it. I am just so happy for his connections, and he had a great ride by Ramon Guce. Things went our way.

Texas shipper Dashers Midnight, a Some Dasher gelding running for Elaine and Joe McAnally, went over the $100,000 mark in career earnings with a second-place finish. Horton Racing LLCs Valiant Hero filly Call Her Hero came in from Iowa to get third.

War Khal, Emperor Valerian, Stray Cat, Frankie B and All About Larry completed the field. Last year's AQHA Racing Champion Distance horse and Red Cell Championship winner All About Larry was eased out of the turn and vanned off following the race.