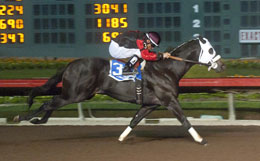 While Hanson's first victory was a bit of a surprise, his second was not as JR Dynasty Mountain left the gates as the 2-1 second choice and quickly opened up on the field before cruising home to a 1 ¼-length win with a 400-yard time of :19.556 under jockey Francisco Rubio, who did not ride Honoroso but won earlier with Win Rabbits Fly in the $75,000 Zoetis Starter Allowance Challenge Championship. Rubio also went on to win the $350,000 Bank of America Challenge Championship (G1) with Vodka With Ice. 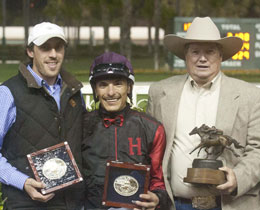 Adequan Derby winning trainer Ryan Hanson, jockey Francisco Ruibo and owner J R Stables. Scott Martinez Photo
Bred in Nevada by Robert Hosier and Jay Bingham and running in the name of their JR Stables, JR Dynasty Mountain began his career at Dixie Downs in Utah in the barn of trainer Ron Moosman. The FDD Dynasty colt won four of six starts as a 2-year-old and ended his season with a runner-up finish in the PCQHRA Breeders Futurity (G2) at Los Alamitos.

As a 3-year-old, he won the Adequan Les Bois Derby Challenge in Idaho in track record time before returning to California for the Challenge Championships. His record now stands at 10-7-1-1 with earnings of $186,357.

This is a really good horse, said Bingham. Ron Moosman has brought him all the way then the Hansons took over and have done a great job.

He ran about a month ago, Bingham added. It was a big race and the horse next to him broke out and he hit the gates so hard they had to scratch him. We were so disappointed and said alright we are just going to come back. Boy, when he broke tonight, oh my. Once we knew he was out we knew he couldnt be caught. Hes that kind of horse.

Bingham indicated they plan to breed JR Dynasty Mountain next spring and then return him to the races in the Challenge program.

Owner and trainer Dean Frey took second with favorite Snowboundbeast, a gelding by Snowbound (TB) who had won five of six starts on the year with four of those victories in Canada. Jose Agustin A. Osornios One Famous Episode, a filly by One Famous Eagle who had won four of five starts in Mexico City, closed to finish third.

Completing the field were Built Tuff Enough, Dm Red Tide, If I Were Famous, Heroes Heart, I V Gone, Royal Regard and Pyc Pick Your Pocket. Courtesy of www.aqharacing.com