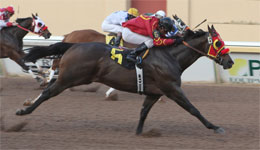 Winning Streak Moves To 5 For Eyeowa Cyclone
OKLAHOMA CITY, OKMAY 27, 2011Eyeowa Cyclones Remington Park season concluded just like it started, with a trip to the winners circle. The 6-year-old gelding roared to a three-quarter length win in a $15,540 Starter Allowance event to post his fifth consecutive win overall and his third straight here.

Owned by Ryan Bachman of Hartford, Iowa and trained by Charlton Hunt, Eyeowa Cyclone was ridden by William Ives. He won his fifth straight race of 2011 and has now won six of his last seven attempts dating back to last September in Prairie Meadows in Iowa.

Friday night, Eyeowa Cyclone defeated Willie Dicey Dude by kicking clear of him in the final 100 yards of the 400-yard race, crossing the finish in :19.746 seconds over a fast track.

The win was the 12th from 28 career races for Eyeowa Cyclone, an Iowa-bred gelding by Mr Eye Opener from the Rare Bar mare Countess Rare Bar. He has won four times at Remington Park. Fridays winners check of $8,892 moves his overall bankroll to $127,001.

The final weekend of the 2011 American Quarter Horse & Mixed-breed Season continues with the biggest program of the meeting on Saturday night. The card features over $2 million in total purses with stakes races galore, including the future stars in the $1,000,000 Heritage Place Futurity and the superstars in the $250,000 Remington Park Championship.

Racing on Sunday and Memorial Day Monday begins at 1:30pm.