Apollitical Jess Impresses In Trials To Record All American Derby
sApollitical Jess defeats Double Down Special to become the fastest qualifier to the richest Quarter Horse derby in the history. 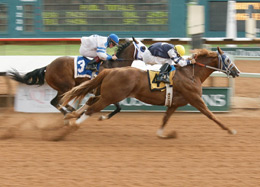 Apollitical Jess earned a hard-fought win over world-record holder Double Down Special in :20.878 for 440 yards, the quickest time from seven trials on Friday afternoon.

Double Down Special raced to the second-fastest time of :20.957.

Double Down Special had a troubled start and recovered under jockey Jacky Martin to mount a charge. Apollitical Jess dug in and repelled that challenge to win by one-half length under jockey Eduardo Nicasio.

I liked drawing next to (Double Down Special). It gave him something to run with, said Aleman.

Owned by Rancho el Cabresto, Apollitical Jess matured at the end of his 2-year-old season when he finished second in the Grade 1 Los Alamitos Two Million at Los Alamitos Race Course in Southern California . He was then rested and Aleman brought him to Ruidoso Downs this summer.

I had him ready for the Rainbow ( Derby in July), but he had trouble in his trial and still ran :21.37 (for 440 yards). That was promising, Aleman said. This was our last shot.

Apollitical Jess built upon that effort and tuned up for the All American Derby trials with a very fast 350-yard allowance win in a near-track-record :17.032.

Hes got his mamas heart. They even have the same color and the same socks (white feet). Hes just bigger, Aleman said.

Vanessa Bartoos Double Down Special, the nations highest-ranked 3-year-old quarter horse, was sent off as the 7-10 trial favorite after four-straight wins. The John Stinebaugh-trained gelding by The Down Side set a 400-yard world record (:18.613) while winning the West Texas Derby at Sunland Park and then won the Grade 1, $569,000 Ruidoso Derby by a neck in his start before the All American Derby trials

The third-place horse in that trial, Mr Truly Uno, recorded the third-fastest qualifying time of :21.138 while making just his fourth career start.

Owned by Jacque Tanton and trained by Sleepy Gilbreath, Mr Truly Uno won a 400-yard maiden race at Ruidoso Downs in his previous start. The gelding is by Feature Mr Jess.

For the complete list of All American Derby qualifiers, their times, sires, dams, owners, breeders, trainers and jockeys CLICK HERE.