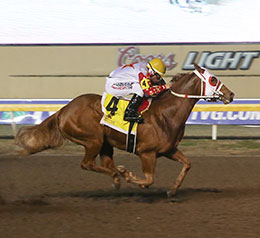 Arrossa is the conditioner of Aint She Tempting, who stormed home a winner at huge odds of 18-1 in the Grade 2, $383,725 Oklahoma Futurity for 2-year-old American Quarter Horses going 300 yards. It's not often one gets that kind of odds on a horse ridden by two-time leading Remington Park jockey James Flores aboard. The rider leads the standings again this year, his first season after being voted the 2019 AQHA Champion Jockey.

Arrossa trains this young filly for Levings Racing of Edmond, Okla. He has risen from small-town obscurity to the top ranks among American Quarter Horse conditioners in the country since 1991. Arrossa, 47, from Jerome, Idaho, started only three horses in schooling races on Feb. 12 here but won with all three. One of those was this winner, Aint She Tempting, and another was Cartels Dynasty, who made these finals as well.

"(Jockey) James (Flores) had a tough decision to make between those two," said Arrossa. "But he said he thought this filly was the best. I had a couple of my friends from California call me before the race and ask which one to bet. I'm not a gambler, so I said, 'I don't know.' I think they ended up picking the right one because they were happy. It was amazing."

"She just does everything right," said Arrossa. "She beat the gate open tonight; shot out of there like a rocket. James gets a lot of credit for that. He did a great job. She is paid up to the Heritage Place Futurity and that's what we are aiming at. I also want to thank Remington Park for showing so much support to the horsemen. I'm new here and it's nice to see this kind of backing from a track to keep this running."

A 2-year-old daughter of champion sire Tempting Dash, out of the Corona Cartel mare Preslee The First, Aint She Tempting was bred in Utah by McColee Land & Livestock. She stopped the timer in :15.191 over a fast surface for a speed index of 97.

Aint She Tempting beat Relentlessly by one length, who was another 1-¼ lengths ahead of third-place finisher Coronados Lady. Aint She Tempting returned $39.40 to win, $14.80 to place and $8.60 to show. Seven Tales, the top qualifier for the futurity and the beaten wagering favorite at 3-5 odds, ran fourth.

Flores won this race for the third time. He also won aboard EC Revenge last year and Coronas First Diva in 2016. His three victories puts him one behind Larry Payne who won this race four times, the most by a jockey since the Oklahoma Futurity has been held at Remington Park.

Levings Racing and Arrossa won the Oklahoma Futurity for the first time.