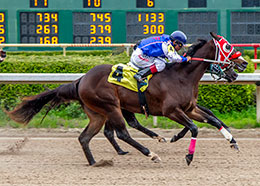 Jess U R Blue surged to the wire of his 400 yard trial in a blazing :19.785 seconds for owner Jose U. Oviedo and trainer Fernando Lopez. Jockey Luis Vivanco had the return call aboard the son of Jess Louisiana Blue out of the Walk Thru Fire mare U R Blue. The $7,000 LQHBA Yearling Sale graduate is now undefeated with four wins, beginning on November 7 at Evangeline Downs.

"He had some minor issues as a 2-year-old, so we did not want to rush him, "said Lopez. "Waiting till the end of the year was the right thing to do and he has impressed us big time. We knew that he was bred to go 400 yards; he's a very calm horse and has always been professional." 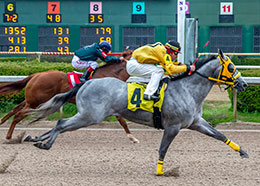 A Quick Jewel, under jockey Noe Castaneda, get the third fastest time in the final trial on Sunday.
© Hodges Photography / Ann Switalski
Fast Black Hunter is owned by Gilbert Morales and trained by Pedro Lopez. The colt by Jet Black Patriot rebounded from his eighth place finish in the $25,000 Billy Montgomery Stakes on January 18.

David Alvarez had the mount, finishing second by a neck to Jess U R Blue. He was bred by Kary Neil La Fleur, and has won two of his 13 career efforts.

A Quick Jewel won the final trial of the afternoon in :19.873 to set the third-fastest clocking of the afternoon under rider Noe Castaneda. Also sired by Jet Black Patriot, she was bred by Run Bayou Ranch LLC and is trained by Miguel Rodriguez.

According to the Louisiana Quarter Horse Breeders Association (LQHBA), this year's purse is the highest in the history of the race. Last year, fastest Qualifier Tdz Louisiana Toast won the final with a purse of $120,782; in 2018, The Cazador was the champion of the $87,506 Mardi Gras Derby.

CLICK HERE for the the ten fastest qualifiers, their times, sires, dams, owners, breeders, trainers and jockeys, who will return for the final on Saturday, March 14.

About Harrah's Louisiana Downs
Located near Shreveport in Bossier City, Louisiana, Louisiana Downs opened in 1974 and was purchased by Caesars Entertainment in December, 2002. With annual Thoroughbred and Quarter Horse racing seasons, the track is committed to presenting the highest quality racing programs paired with its 150,000 square foot entertainment complex offering casino gambling, dining and plasma screen televisions for sports and simulcast racing.