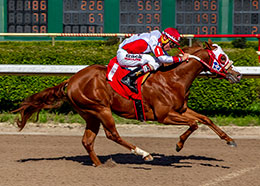 Delfino Lozano, IV's Louisiana homebred El Camino Cl had no difficulty with his rail post position as he won his trial in :15.561 under Eddie Sanchez. Sired by leading sire Heza Fast Dash out of the Mr Jess Perry mare Eying Miss Perry, the sorrel colt was a schooling race winner on January 31 and drew off as the favorite in the ninth trial, earning a speed index of 92. The impressive juvenile is trained by Jose Sanchez, III.

"He ran a perfect race," stated her trainer. "I was worried about him drawing the rail, but he handled it like an experienced veteran! Once he got going, he ran faster and faster."

El Canio Cl is a half-brother to stakes-placed Zapta Chic and Eyeing Louisiana Game. The second dam is the Grade 2 winner Louisiana Eye Opener. This is family of champion Jess Louisiana Blue and champion sire The Louisiana Cartel. 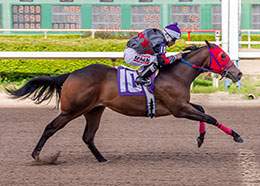 One Sweet Filly, under jockey Ricardo Hernandez, Jr., posting the second fastest clocking in the 11th trial Saturday. © Hodges Photography / Ann Switalski
J. and J. Stable will return to the final again this year with their homebred, One Sweet Filly, winner of the 11th trial in :15.597 seconds. The daughter of One Sweet Jess is trained by Jose Carrizales and was ridden to victory by Ricardo Hernandez, Jr. She did not run in schooling races, so her effort today was a very nice surprise Carrizales. "The owners bred her and never put her in a sale," he said. "We felt she was a nice filly but had no idea what to expect. She broke well and got away from the gates quickly, which the rest of the field did not. That helped because she ran a little green down the track, but our jockey did a good job with her." A $10,500 2016 Los Alamitos Equine Mixed Sale graduate, One Sweet Filly is out of the RG3 winning Buzz World mare Firebaugh Filly, dam of stakes winner Aries Man. One Sweet Filly is a full-sister to stakes-placed Fiery Fury and stakes-placed Race Lyn. 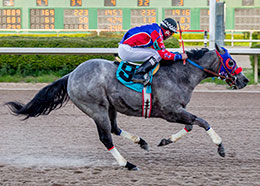 Denalia Sweet Jess, under jockey Modesto Pina, posts the third fastest time after a two-length effort in the closing trial on Saturday. © Hodges Photography / Ann Switalski
Boxcar, a son of by multiple grade 1 sire Freighttrain B, won the fifth trial of the day giving Jose and his younger brother, Eddie Sanchez, two qualifiers. The sorrel colt is owned by Mario and Julio Ramirez and won his trial in :15.667 seconds.

He was an impressive schooling race winner and followed it up with a solid maiden-breaking score by a margin of one length and a speed index of 89. He was bred by Chad Hart and Bobby D. Cox and was sold at the 2019 LQHBA Yearling Sale for $16,000.

Boxcar is the second foal from the stakes winning Woodbridge mare Wood Be Charming, a half-sister to RG2 winner Dashin Ace. The second dam is the Grade 3 winner Ace Crystal Charm by Shazoom. 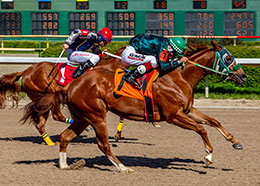 Feelin Right, under jockey Fracisco Calderon, set the fourth fastest time in trial 7 Saturday. © Hodges Photography / Ann Switalski
"He was not facing forward when the gate opened," said Sanchez. "But he came running despite the start. We are very happy to have two headed to the final."

Trainer Wendy Garcia, who won the 2018 Mardi Gras Futurity with Guidry Pride II saddled the third fastest qualifier, Denalia Sweet Jess. Bred by Russell Mowad, the daughter of One Sweet Jess crossed the wire in :15.608 under rider Modesto Pina, who is Garcia's husband.

A $9,000 LQHBA Yearling Sale graduate by One Sweet Jess, Denalia Sweet Jess is from the family of champions Strawberry Silk, winner of the All American Futurity and dam of champion and world champion sire Stoli. 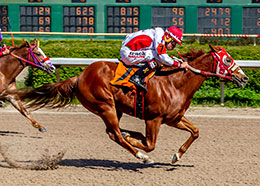 With two posted works at Retama Park, Feelin Right won his trial in :15.660 seconds. Trainer Alberto Solis gave a leg up to rider Francisco Calderon, who guided the colt to a half-length score with a 90 speed index. 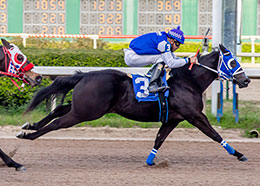 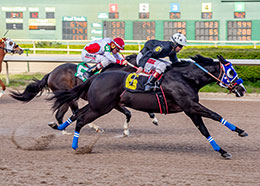 About Harrah's Louisiana Downs
Located near Shreveport in Bossier City, Louisiana, Louisiana Downs opened in 1974 and was purchased by Caesars Entertainment in December, 2002. With annual Thoroughbred and Quarter Horse racing seasons, the track is committed to presenting the highest quality racing programs paired with its 150,000 square foot entertainment complex offering casino gambling, dining and plasma screen televisions for sports and simulcast racing.