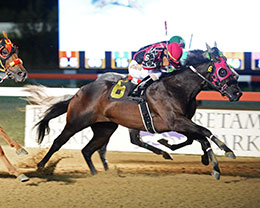 Relentless Dynasty Steps Up in a Big Way Winning the $479,196 TQHA Sale Futurity at Retama Park
By Martha Claussen

The son of leading first-crop sire Hes Relentless out of the FDD Dynasty mare Winning Dynasty is owned by Andres Guerra and trained by Adrian Huitron. He broke his maiden on May 13 at Sam Houston Race Park and set the fifth-fastest qualifying time in trials run on July 12. William Fowler, Jr. is the breeder.

Regular pilot Victor Urieta, Jr. guided the bay colt to the win tonight, surging late down the center of the racetrack to catch Perrys Secret at the wire. The final time for the 350 yard championship, contested over a fast track, was :17.586; earning the winner a speed index of 101. 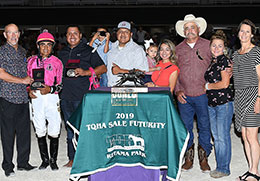 The winning connections of Relentless Dynasty accept the TQHA Sale Futurity stakes trophy on Saturday at Retama Park. © Coady Photography
"I thank God and my team," said an elated Huitron. "All the talk on the backside was about the two big horses, but we knew we had a really good colt. He ran under the lights for the first time in the trials and it cost him a few spots in qualifying. So, we scheduled a few works under the lights to get him better prepared for tonight."

Perrys Secret, winner of the $323,571 West Texas Futurity (G2) on May 5 at Sunland Park, finished second by a neck. Trained by Josue Ponce and ridden by Manuel Gutierrez, the gelded son of Hez Our Secret added $104,445 to his tally in just his first loss in four starts.

Domino Cd, with Ricky Ramirez in the saddle, hit the gate, but came running late to finish third. Lj Lightning Cartel closed from the far outside post under Luis Vivanco to complete the superfecta.

A homebred racing for owner-breeder and trainer Jorge Haddad, Domino Cd is a son of Dominyun from the Corona Cartel mare Cindys First Cd.

Trump My Record, by first-crop sire Apollitical Blood, was going for his fifth consecutive victory and third futurity of the year for owner Cruz Nava. He broke well under jockey Eddie Sanchez, but bobbled midway in the race and finished fifth.

Coronados Lil Lady, Jess Dashing Along, Eos Shez My Secret, Medici and My Favorite QH completed the order of finish.