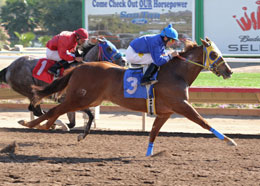 The 10 fastest qualifiers will return to the Arizona racetrack on Sunday, December 16, and vie for the winner's share of a $10,000-added purse for 2-year-olds going 400 yards.

Coming off a second place effort in the $28,737 AQRA Futurity on November 11, Harlee Tucker broke her maiden over Nonitas Scooter in the first of two trials. Ralph and Carolyn Fales own the Heza Motor Scooter filly trained by their son Matt Fales and ridden by Jorge Bourdieu. Her time of :20.201 seconds was the fastest from the 16 head starting in the trials.

Harlee Tucker is 1-1-0 in three starts and has earned $7,568. Sergio Chavez II bred the sorrel miss in Arizona from the Rocky Jones mare Phenomena.

The same combination of Ralph and Carolyn Fales as owners, Matt Fales trainer and Jorge Bourdieu jockey, scored a 1-¼ length victory in the second trial with Madd Dog. His time of :20.329 were the second fastest, pushing his career record to 3-2-1 in eight starts and more than $51,000 in earnings.

The Fales' homebred, by Dog Daze Afternoon out of Merri Roc by Rocky Jones, won a futurity last May at Turf Paradise and was third in the AQRA Futurity in his last start on November 11.

The aforementioned Nonitas Scooter, also a daughter of Heza Motor Scooter, held on for the third fastest time of :20.330. Alvaro Monteverde trains the filly, out of Nonas Valentine by Chicks Beduino, for Jorge Luis Solano.

The Omar E. Lorta owned-bred-and-trained Yn Makario finished third in the fist trial for the fourth fastest time of :20.443. The Hez Fast As Cash gelding is out of Fun Being Fickle, by Devon Lane (TB).