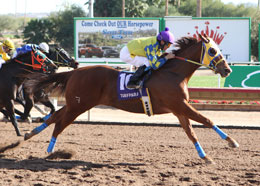 Trainer Matt Fales and owner's Carolyn and Ralph Fales with family and friends following their victory in the AQRA-Turf Paradise Derby on Saturday.
© Coady Photography
Matt Fales conditions the Tac It Like a Man homebred for his parents Carolyn and Ralph Fales. The sorrel gelding out of Watchin The Rain, by Takin On The Cash was bred in Arizona. It was the second derby win of the year for Block N Tackle and his fourth career stakes victory.

Famous Photo races for owner Amado De La Riva and is trained by Sergio Garcia. David Reyes-Frisby rode the Famous Lane 3-year-old out of Quick To De Photo-TB, by Hapgood-TB. It only the fourth career start for the lightly raced gelding that has earned $18,239.

Bringin It On, is another homebred owned by Carolyn and Ralph Fales and trained by Matt Fales. Joe Ruiz was aboard the FDD Dynasty gelding out of Already In Love, by Corona Cartel. The $3,895 show purse pushes the bay's earnings total to $37,662.

Edgar Avechuco's Jm Blue Light shocked the field of at 10 in Saturday's $38,950 Turf Paradise Maiden Stakes to win at 24-1 odds. Out finished by a neck, Pr Wavrunner was followed by Guitar On Fire who was a nose back in third. 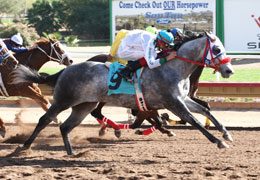 Jm Blue Light, under jockey Raul Valenzuela, winning the Turf Paradise Maiden Stakes at 24-1 odds.
© Coady Photography
Trained and ridden by Raul Valenzuela, it was the first career win in four starts for the FDD Dynasty gelding who did not race as a two-year-old. He completed the 300 yards in :15.917 seconds.

After finishing sixth in his first three starts, the $7,403 winner's pot boosted his total earnings mark to $7,393. Mr. and Mrs Judd Morse bred the gay gelding in California from the Strawfly Special mare Windis Shyann.

Pr Waverunner entered the race as the fastest qualifier from the November 16th trials. Racing for Juan Robles and conditioned by Alejandro Perez Sanchez, the Wave Carver 3-year-old picked up $2,356 for second. Klyer Racing, LLC bred the gray gelding in Alberta, Canada from the Leading Asset, by Special Leader.

Also lightly races, Guitar On Fire was making only his fourth career start for trainer Ricardo Aaldana and owner Israel Bujanda Garcia. Rick Oliver rode the Slm Flashfire 3-year-old out of So Easy On The Eyes, by Mr Eye Opener. He earned $1,178 for the effort.