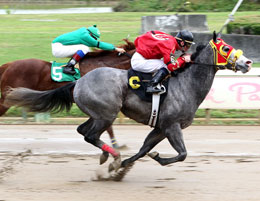 The Laddie trials, contested at 400-yards over a Hialeah Park racing strip that was listed as good after on-again, off-again rains throughout the morning in South Florida, the ten qualifiers for the final came out of only three different trials. The 10 two-year-olds, from 47 starters, recording the fastest times will return the day after Christmas (December 26th) to vie for the winner's share of the $100,000-added final.

Jockey Brian Theriot moved Bachman's Count The Menace to the front shortly after the break, then steadily pulled away, before stopping the timer at :19.510 seconds for the fastest time.

It was the third career, win in eight starts, for the Charlton Hunt trainee who has earned more than $43,000 this season. The gray Executive Menace gelding also qualified to the $84,664 Iowa Double Gold Futurity(RG3) at Prairie Meadows last August. He is out of the Rare Bare mare Countess Rare Bar.

Lil Shorta Cash set the second fastest time of :19.579, after winning the final trial by a head over Tf First Pick. It was the only trial contested over a sloppy surface. Rodney Layne Harmon owns the Panther Mountain colt out of Shakem Ur Cash, by Royal Shake Em. Brian Muse conditions the three-time winner with Jesus Salazar riding.

The second trial went to Cash For Wagon Boss, also ridden by Salazar and trained by Muse, who posted the fifth fastest time of :19.618. The Pyc Paint Your Wagon 2-year-old came into the trials off a third place effort in the $229,000 Valley Junction Futurity(G3) at Prairie Meadows on September 30th. Owned by David and Jamie Nix, the brown gelding has earnings of more than $67,000 from eight career starts.

Racing resumes at this iconic South Florida racing emporium on Friday December 16. Hialeah Park will race on a Friday-Saturday-Sunday basis for the duration of the season, with one exception. The track will be dark on Christmas Day, but will offer an eight-race program Monday December 26.