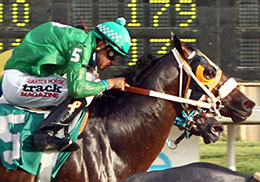 Notes:
San Lorenzo Flash made his career debut in the Lee Berwick Million Futurity(RG1) trials where he finished half-a-length off Denalia Sweet Jess in the third trial. His time of :17.546 held up as the second fastest on night 1.

"We did not run him in the Laddie as he needed more time to mature," trainer Jesus Marquez said. "I think it was the right decision as we got him ready for the Lee Berwick, and even running second, he qualified for the final. Hes pretty calm for a stud and I have no problem with his rail draw. My nephew (owner Rogelio Marquez, Jr) and I werent expecting to have two finalists; its pretty amazing!" 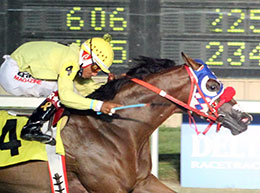 Notes:
Ought To Go Tee was the second fastest qualifier to the $357,981 Louisiana Laddie Futurity (RG2) in his career debut at Delta Downs June 13. He broke in at the start under jockey Jose Oviedo in the final to finish a solid second to Sir Louisiana Dash. On the opening night of the Lee Berwick Million Futurity (RG1) Ought To Go Tee "blew them away" with an impressive 3-¾ length win to secure the top qualifying time of :17.360 seconds, a 96 speed index.

Ought To Go Tee was purchased privately by owner Jose Oviedo last November.

"We knew from the beginning that he was a fast horse. He was impressive in his Laddie Futurity trial and ran well in the final, second to a phenomenal runner (Sir Louisiana Dash)," trainer Fernando Lopez said. "My owner had not paid him into the Lee Berwick, but was happy to supplement him. He came out of his trial well and continues to be a very professional horse."

The son of multiple stakes sire Tee Cos is the second foal from the Bigtime Favorite mare Vf Ought To Go Max. The second dam is the stakes-producing Evangeline Downs Juvenile winner Ought To Go Shine by First To Shine. This is the family of champions Old Habits, Solvency, Special Leader and Your First Moon. 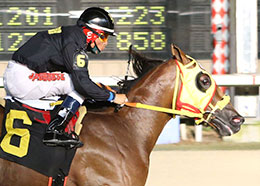 Notes:
Carters Yachtz broke his maiden in second career start July 4th in a $30,000 Allowance at Delta Downs. He returned August 1st with an impressive 2-length win in the Lee Berwick Million trials to get the second fastest qualifying time on Night 2.

"I only had him three weeks before he ran in trials for the Laddie Futurity. We gelded him after that and he improved in each of his races at Delta," trainer Martin Trejo said. "He is a very sound horse and has been training well. I was hoping to draw a little further outside for the (Lee Berwick) final, but we had pretty good luck last weekend winning the Firecracker Futurity (with Hes Innocent) from the two hole!" 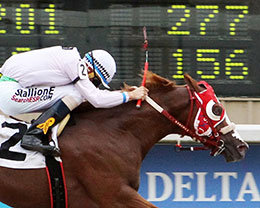 Notes:
The most seasoned stakes horse in the field El Camino Cl won the $315,166 Mardi Gras Futurity(RG2) on March 14th after an impressive one-length win in his career debut when he posted the fastest qualifying time. El Camino Cl got his third consecutive win in the Laddie Futurity(RG2) trials, after getting shut off at the start then rallying to win by 1-¼, while qualifying for the $357,981 final.

The son of leading sire Heza Fast Dash suffered his only career loss in the Laddie final when he finished third. He returned to form in the Lee Berwick Million trial to post a 1-½ length win while getting the third fastest clocking on the Night 2.

"He is a very nice horse. Delfino breeds and raises his horses in Zapata, Texas and is a great owner," trainer Jose Sanchez said. "In his Mardi Gras Futurity win, he did everything right; broke straight and finished well. His only loss in five races was in the Laddie. He was down on the inside and the faster horses were further out, but we were happy with his (Berwick) trial win."

Sanchez and his younger brother Eddie teamed up to win the $1 million Texas Classic Futurity(G1) with Trump My Record last November at Lone Star Park.

"We hope we can win our second million dollar futurity this weekend, but there are some very tough horses in this final," the young trainer added.

The homebred racing for owner Delfino Lozano, IV, El Camino Cl is out of the winning Mr Jess Perry mare Eying Miss Perry, the dam of three black-type that also includes Eying Louisiana Game ($53,506) and Zapata Chic ($43,534). The second dam is the Grade 2 winner and multiple stakes producer Louisiana Eye Opener ($151,253) by Mr Eye Opener. She is the dam of two blacktype including Grade 1-placed Dutcher ($194,833) and Grade-1 placed Eye On Corona ($133,718). 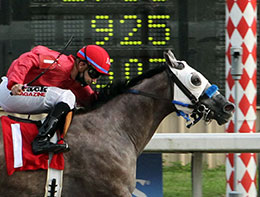 Notes:
Runaway Fast Dash broke his maiden in the Lee Berwick Million trials while posting an impressive 1-½ length win to get the fifth fastest clocking of :17.617 seconds on Night 2. Prior to that he was a seventh in his career debut, a trial for the Mardi Gras Futurity(RG2) and a troubled third in his Laddie Futurity(RG2) trials at Delta.

"He was a bit of a hard luck horse earlier this year," trainer Ned Goutierrez said. "In his Mardi Gras Futurity trial, he stepped back when the gates opened and lost all chances. He was bumped hard and knocked sideways in his Laddie trial. But he turned it around in his Lee Berwick trial; left well and got a nice win. He was bucking and kicking the next morning; if he breaks well, we feel he can run with the best of them." 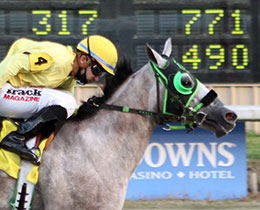 Notes:
TF Runaway Dashin broke his maiden fourth trial on night 1 of the Lee Berwick Million trails to get the final qualifying spot at :17.669 seconds. He entered the July 31 trial off a troubled seventh-place in a maiden race July 10th.

"Like so many 2-year-olds, when we first got him, he was really green. But after his first start, he improved. Sir Runaway Dash has been one of the top producers in Louisiana for many years and we really like this horse," trainer Alonso Neri said. "I have no doubt in my mind that he can run with the big boys and am really excited about our chances in the Lee Berwick!" 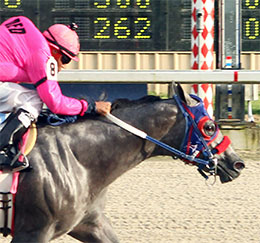 Notes:
Denalia Sweet Jess broke his maiden in his career debut while posting a two-length win and qualifying for the $315,116 Mardi Gras Futurity(RG2) at Louisiana Downs. The son of multiple stakes sire One Sweet Jess bumped at the break and finished a close third in the blanket-finish to earn his black type.

His second out was a second-place effort in the Laddie trials failing to qualify. He returned to winner's circle with a half-length effort in the Lee Berwick Million trials to get the second fastest clocking on night 1.

"From the beginning, we always knew he had talent. He showed us his heart qualifying for the Mardi Gras Futurity at Louisiana Downs and just missed the cut-off for the Laddie," trainer Wendy Garcia said. "He ran hard in his Lee Berwick trial and we are proud of him and appreciate Russell Mowad for breeding such a nice horse!" 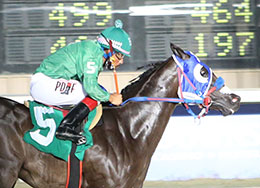 Notes:
The lightly raced Neutral B broke his maiden in the Lee Berwick Million trials while posting an impressive one-length win to get the fourth fastest time on Night 2. Prior to that he was third in the career debut, a trial for the Laddie Futurity(RG2).

"We did not want to rush him early," trainer Eduardo Morales said. "He ran greenly in his first race, but improved in his second start, which was the Lee Berwick trial. He came out of the race well and it seemed like it did not take too much out of him. We like his draw and hope for a good final."

A victory would be Morales first in a seven-figure futurity. He and his wife, Christine owned Dasha Blue, who ran second at odds of 35-1 to Mpshinning in the 2018 LQHBA Louisiana Million.

"Dasha Blue took a long time to mature and focus," added Morales. "Neutral B has done it much faster." 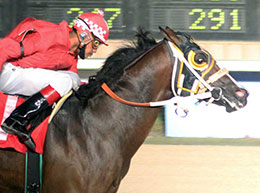 Notes:
San Lorenzo was the third fastest qualifier to the $357,981 Louisiana Laddie Futurity (RG2) in his career debut at Delta Downs June 13. He broke in in the final to finish fifth. On the second night of the Lee Berwick Million Futurity (RG1) San Lorenzo rolled to a 2-¾ length win to secure the top qualifying time of :17.365 seconds, a 96 speed index, on Saturday.

"He is totally different than San Lorenzo Flash! Hes headstrong and a biter. Our groom has to be very careful in his stall! But once you saddle him, he is all business," trainer Jesus Marquez said. "He had a bad start in the Laddie Futurity (running fifth in the final), but ran a very good race in his Lee Berwick trial."

Notes:
Shortstop Express broke her maiden in the Lassie Futurity after jockey lost his hip and she rallied to a three-quarter length win, failing to qualify. The daughter of leading 2020 sire Freighttrain B followed that up with sharp win in the $30,000 Allowance for LA-Bred Fillies on July 3. She returned in the Lee Berwick Million trials to run a close third in the Denalia Sweet Jess' trial.

"We picked her out at the (LQHBA Yearling) Sale; liked both her sire and momma, but when we saw her in the ring, we knew we had to buy her," trainer Joel Huitron said. "She jumped a little in her first start, but Ubaldo Luna has done a good job with her in her last two races. He doesnt pressure this filly. Plus, we really like that we drew the far outside gate!"

Shortstop Express is the lone filly in the race, but owner Jose Estrada won the 2018 Lee Berwick Futurity with the super talented filly, Eysa Jess Jumpn.

The $13,500 LQHBA Yearling Sale graduate is out of the stakes-placed First Prize Perry mare Allizoom ($113,016). The second dam is AQHA Racing Champion 2-Year-Old filly Lett Her Zoom ($309,167), winner of the Kansas Futurity(G1) and runner-up in the Texas Classic Futurity(G1).

A "special thank you" to Martha Claussen for additional reporting
and Coady Photographer Paula Tindall.