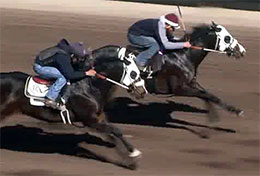 Eagle Empire Tops First Morning Of Gate Workouts, 34 Juveniles Posted Works
LOS ALAMITOS, CAFEBRUARY 26, 2020Eagle Empire, a colt by One Famous Eagle, and Jess Lyndes Reason, a filly by Good Reason SA, were among the talented 2-year-olds that were in action in the first morning of gate workouts Tuesday at Los Alamitos Race Course.

CLICK HERE to watch all of Tuesday's works are available for viewing online.

Reliance Ranches' Eagle Empire posted the bullet work of the morning, as the Oklahoma-bred by One Famous Eagle out of the Valiant Hero mare Belle Helene, worked the 220 yards in :12.20.

The Robbins-trained colt is a full-brother to Maghelene ($58,253), a stakes winner in Canterbury and the runner-up in the 2018 Prairie Meadows Juvenile Challenge Stakes. Maghelene qualified to the 2018 (G2) AQHA Juvenile Challenge Championship. Belle Helene won three of 10 career starts and finished in the top two in eight of those outings. She earned $214,858 in a career that featured wins in All American Futurity trial and Ruidoso Futurity trial in 2013. She also finished second in the 2013 Rainbow Futurity and second in the 2014 Mr Jess Perry Stakes at Ruidoso Downs. 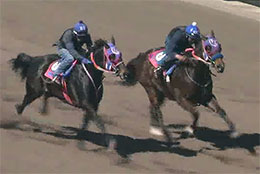 Danjerous is out of the classy Shez Jess Toxic, winner of the Grade 2 AQHA Juvenile Challenge Championship and a participant in 18 stakes races during her career. Shez Jess Toxic ($235,296) finished second in the 2013 (G1) Mildred Vessels Memorial Handicap and second in the 2012 (G2) Southern California Derby. Danjerous is a half-sister to the four-time Grade 1 stakes placed runner Danjer ($526,711).

Here are other notable runners from a busy first morning of workouts: