Hes Relentless, a champion son of leading sire One Famous Eagle, capped off one the best first-crop sire years in history with earners of $2,123,119.

"Thank you to the ownership for allowing us to be a small part of Relentless, it is an honor for him to call Bob Moore Farms home. Thanks to the support of many of the industry's leading mare owners, Hes Relentless has been booked full each year at stud and we look forward to celebrating the successes of his progeny for years to come," he added. 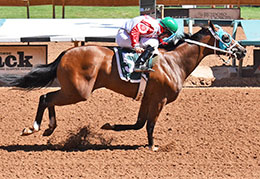 Determined One, under champion jockey Cody Jensen, qualifying to the $3 million Grade 1 All American Futurity at Ruidoso Downs. © Jake Rogers / Ruidoso Downs
On his own, the young stallion sired 38 winners, 11 stakes winners and 3 graded stakes winners in his first crop.

Owned by a partnership, Hes Relentless won or placed in 13 of 15 career starts while earning $616,380. His was named the AQHA Racing Champion 3-Year-Old Colt of 2014. He won the Hobbs America Derby(G2) was second in the Heritage Place Futurity(G1), Championship at Sunland Park(G1) and third in the Rainbow Derby(G1) and Zia Park QH Championship(G1). He also was a finalist in the All American Futurity(G1) and Texas Classic Futurity(G1).

Hes Relentless hails from one of the leading broodmare lines in the industry. His second dam is the AQHA Racing Champion 2-Year-Old and 3-Year-Old Filly Dashing Phoebe ($609,553) by Dash For Cash.