Robicheaux Ranch, Inc. and Spendthrift Farm Announce Exclusive Opportunity
The leading Thoroughbred General Sire of 2019, Into Mischief will be available to Quarter Horse mares in 2020. 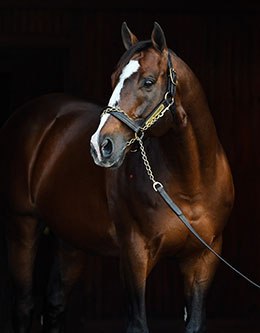 "It's not something weve ever done before, so we reached out to one of the most successful Quarter Horse operations, Robicheaux Ranch, to guide us through the process and to handle it on our behalf.," Toothaker said.

"Through those discussions, Into Mischiefs name came up and we decided we would also make him available to the Quarter Horse community. Obviously, hes the No. 1 Thoroughbred sire in North America and can get an extremely fast and classy racehorse. We will be collecting and freezing the semen soon in order not to interrupt either stallion from their full books for the upcoming Thoroughbred breeding season," he added.

Into Mischief, the leading Thoroughbred General Sire of 2019, and Mitole, 4-time Grade 1 winner including the 2019 Breeders' Cup Sprint(G1) at Santa Anita Park last month, will be offered to Quarter Horses through this unprecedented arrangement between Robicheaux Ranch and Spendthrift Farm.

"We need to make more of an effort to reintroduce Thoroughbred bloodlines back into our breed to increase endurance, longevity and a badly needed out-cross for our Quarter Horse mares. Into Mischief and Mitole are two once in-a-lifetime opportunities to do that," he added.

Four-time Grade 1 winner Mitole will stand his first season in 2020 at Spendthrift Farms where he has been booked full at $25,000. Quarter Horses mare can breed to the #1 Sprinter in North America with frozen semen at Robicheaux Ranch for a 2020 fee of $4,000.

Recording his fourth grade 1 victory of the year Nov. 2, Mitole stalked the pace and delivered down the lane to catch Shancelot in an exciting renewal of the $2 million Breeders' Cup Sprint (G1) at Santa Anita Park. Ricardo Santana Jr. was aboard for trainer Steve Asmussen. 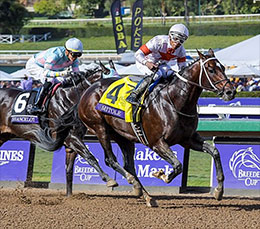 . Bred in Kentucky by Edward Cox Jr., Mitole is out of Indian Miss, by Indian Charlie. The Breeders' Cup Sprint marked his sixth win from seven starts this year, and essentially assured himself the Eclipse Award as the top male sprinter. In April, Mitole won the Count Fleet Sprint Handicap (G3) at Oaklawn Park and followed with a 3-½ length score in the Churchill Downs Stakes(G1) going seven furlongs. His signature win came June 8 at Belmont Park when he held off the late run of McKinzie in the Runhappy Metropolitan Handicap (G1). 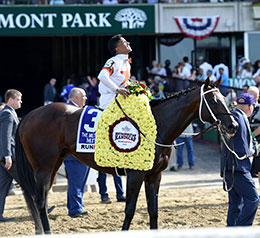 Mitole, under jockey Ricardo Santana Jr., following his win in the $1.2 million Metropolitan Handicap at Belmont Park.
© Courtesy Belmont Park
Mitole came back quickly in the July 27 Alfred G. Vanderbilt Handicap (G1) at Saratoga Race Course and finished a tiring third while being pinned down along the inside throughout the six-furlong race. He redeemed himself with a three-length win over Firenze Fire in the Forego Stakes(G1) at the Saratoga on the Travers Day undercard.

Asmussen, whose was raised in the Quarter Horse industy, did a masterful job of keeping Mitole in top form all year. In advance of the Breeders' Cup World Championships, the horse had five works over the Santa Anita surface, including a bullet :58 4/5 Oct. 22.

"The term 'brilliance' gets used a lot in this business, but there aren't many horses in recent history that have shown as much consistent brilliance as Mitole," Ned Toffey, Spendthrift Farm general manager told Bloodhorse.com earlier this year.