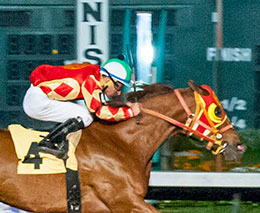 A Pair Of Snowbound Superstar Handicap Divisions On Tap Sunday At Los Alamitos
LOS ALAMITOS, CADECEMBER 6, 2019Quarter Horse distance standouts Run Raging Rhino Run, Ballast Point, and Loan Sharky are among the distance stars that will race in a pair of divisions to the Snowbound Superstar Handicap on Sunday at Los Alamitos. Each race will feature a $15,000 purse and will be contested at 870 yards.

Dan Wilson's Run Raging Rhino Run has been among the most consistent performers at 870 yards this year. He's won three races around the turn, including the Wheatland Handicap in April and an allowance race against some tough Thoroughbred foes in late July. The Felix Gonzalez-trainee will headline the first division of the Snowbound Superstar against allowance runner-up JB Gray Dawn and four other foes.

Paul Jones and Thompson Racing's Ballast Point was very impressive when wiring an allowance event by four lengths when going around the turn. He then finished second to the outstanding Yanque in the Scott Lewis Handicap at 550 yards, and has now set his sights on the second division of the Snowbound Superstar.

Ron Martin's hard-knocking gelding Loan Sharky, who scored a big victory around the turn, is also in this race, as is Brian Koriner and Janet Lyons' Thoroughbred Miss That Kat, twice a runaway winner at Los Alamitos at 870 yards and in his last start a winner at Santa Anita at 6 furlongs on June 8.