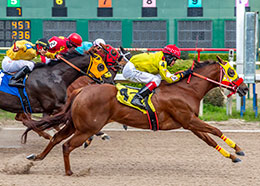 With David Alvarez in the saddle for owner Carlos Acuna, the 4-year-old daughter of Coronas Leaving You out of the Mr Jess Perry mare Second Down Perry broke well and held off the fast closing Fabulously Black by a margin of a half-length. She covered 350-yards in :17.844 seconds, over a fast track, earning an 87 speed index.

Bred by Grant Farms LLC, this was the second stakes win for Corona Down Perry, who upset the field in the $30,000 Billy Montgomery Stakes last September at Evangeline Downs. She has now won five of her 18 career efforts and banked $77,093. 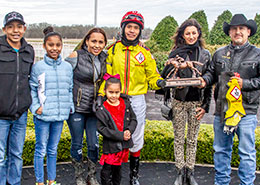 Leigh Perry presents the winning connections of Corona Down Perry the Mr Jess Perry Stakes trophy Saturday at Louisiana Downs. © Hodges Photography / Ann Switalski
"She is a very nice filly," said Trejo. "Today, she stood well in the gates and was in control for the entire 350-yards."

Corona Down Perry ($6.60) earned $15,000 this afternoon, increasing her career earnings to $87,093. Trejo is considering making one more start this season at Louisiana Downs before shipping her to Delta Downs.

The Cazador, a multiple stakes winner who captured the 2018 Mardi Gras Derby here for owner Rayne Knight and trainer Mike Zingelmann, ran third. John Hamilton had the riding call aboard the Sir Runaway Dash 5-year-old out of Told Ya by Toast To Dash. Bred by Zingelmann and Curtis Crewnwelge, The Caszador has earned $155,995.

Post time favorite Lightemupwithcharm, recovered from a poor break to complete the superfecta. Dash by Junior completed the order of finish as Tuckers Prize was an early scratch.

Mr Jess Perry, the acclaimed racehorse and stallion passed away in November, 2017 at the age of 25. Bred by Jesse Perry, the father of noted Louisiana breeder and LQHBA Executive Director Emeritus Leverne Perry, Mr Jess Perry was voted 1994 AQHA Racing Champion 2-Year-Old and Champion 2-Year-Old Colt, winning 12 of his 21 career starts, including the 1994 LQHBA Breeders Futurity. He became one of the state's top stallions, with graded stakes winning progeny including Apollitical Jess, One Famous Eagle, Noconi, Matabari, Miss Racy Jess, and Fredricksburg.

About Harrah's Louisiana Downs
Located near Shreveport in Bossier City, Louisiana, Louisiana Downs opened in 1974 and was purchased by Caesars Entertainment in December 2002. With annual Thoroughbred and Quarter Horse racing seasons, the track is committed to presenting the highest quality racing programs paired with its 150,000-square foot entertainment complex offering casino gambling, dining and plasma screen televisions for sports and simulcast racing.